The Moot Court Bench trains UoC to victory at the JHJ 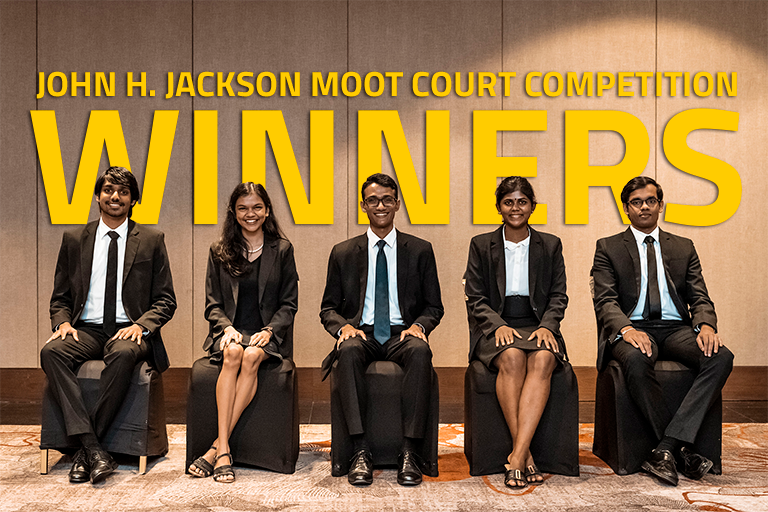 The Moot Court Bench team representing the Faculty of Law, University of Colombo comprising of Saheli Wikramanayake, Avishka Jayaweera, Adithya Ramanitharan and Sandun Batagoda who were trained by Harish Balakrishnan — Senior Partner at the MCB — and Harrison Mbori, have emerged Champions at the Global Rounds of the 19th John H. Jackson Moot Court Competition 2021.

The John H. Jackson Moot Court Competition is the premier International Moot Court Competition organized annually by the European Law Students’ Association (ELSA) focused on International Trade Law (ITL) and based on the rules of the World Trade Organization (WTO). The prestigious competition is held in Geneva each year but migrated to a virtual platform to accommodate travel restrictions and attracts over 100 teams from across the globe, as well as WTO experts from legal academia and the WTO Secretariat.

In the Final Round, the UoC team not only prevailed as the first Sri Lankan team to win JHJ amongst 100 of the best international universities, but also triumphed in being specially recognized for their performance in the form of several awards for both their written and oratory skills. The team was awarded the Overall Best Written Submission on Behalf of the Respondent, the award for Best Orator in the Preliminary Rounds and Saheli Wikramanayake was adjudged the Best Orator in the Grand Final.

The UoC victors commenced their journey after being selected for the MCB’s International Trade Law Program in July 2020 alongside a team from the Sri Lanka Law College, and the latter team was coached by Senith Abeynayake — the current head of ITL at the MCB — assisted by Professor Rajesh Sharma.

The two teams embarked on an extensive training regime in preparation over the course of several months leading up to the West and South Asian Regional Round in May 2020 and exhibited their talent and growth through their exceptional performance that secured the UoC team the Award for the Best Memorandum as well as the semifinalist position which advanced the team to the Global Rounds in Geneva.

The pillar of support for the teams during this journey, the Moot Court Bench, is Sri Lanka’s first fully integrated training platform for advocacy in Alternate Dispute Resolution (ADR) and ITL in partnership with the Commercial Law Development Program (CLDP) of the United States Department of Commerce. The accomplishment at the JHJ Moot Court Competition is another highlight of the continued and unparalleled progress of the MCB which has displayed consistent success in its endeavors since its inception in 2018 following the Sri Lankan team’s achievements at the Willem C. Vis International Commercial Arbitration Moot. Today, the MCB strives to drive the conversation surrounding ADR and ITL in Sri Lanka forward while expanding its own horizons and establishing itself as the foremost advocate of reforming local and international Dispute Resolution Systems.